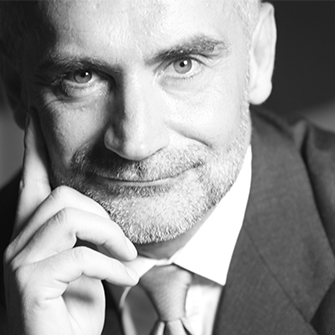 Euprepio was born in Francavilla Fontana, in the Italian region of Puglia, Euprepio Padula studied law and took his first professional steps as a lawyer at IBM, but immediately his path was crossed with Human Resources and Business Organization. This let him his incorporation with only 26 years, in 1992, to Nicholson International, a British company leader in executive selection processes. His career in this organization was as fast as his international progression was. Euprepio Padula was immediately promoted to the General Direction for Spain, southern Europe and South America.

In 2002 he joined the World Executive Committee of Alexander Mann, the leading British corporation in the world in terms of Human Resources and Leadership solutions. In Alexander Mann, he reached the position of Director, worldwide, of Executive Search and Leadership Management. In 2005, tired of the ties of the big multinationals, he decided to create his own firm, Padula & Partners, dedicated to the search of Executives and to the Strategic Consultancy of Human Resources and political and business Leadership.

Interested in the human aspect of companies and systems in general and in the personal transcendence of the individual through work, Euprepio Padula has specialized in the management of emotions as a common thread of the Executive and Group Coaching programs that he teaches, from years ago, both senior executives and politicians and Management Committees of some of the most important multinationals in the world, having specialized in all areas that are related with communication and leadership.

In recent years, this activity has become more important as a Coach and Expert in Leadership, which has achieved an extraordinary prestige, in Spain and in the rest of Europe and Latin America. Euprepio Padula regularly collaborates with relevant politicians and Administration leaders and combine his business activity with a prolific facet as a painter, for more than ten years, which has led him to close the circle of his passions, joining what he has always felt for the field of Human Resources with his concern for art.

He has participated in many individual and group exhibitions in many countries and his work is in important privates collections in Europe and the United States. Through this parallel artistic activity, Euprepio Padula has created the new concept of “Art & Business”, through which he channels the creativity and artistic sensibility present in any individual as a key of his improvement and professional excellence. Above all, he considers himself as a Renaissance spirit that firmly believes that, in life, you can reach all the desired goals without having to focus only on a specific area. For this reason, it promotes, through its work, creative and inspiring leaderships, placing outside of its “comfort zones” leaders from very diverse sectors.

Euprepio Padula is a successful lecturer. Stand out his round tables and public interventions, both on the Leadership in the XXI century and about key aspects in the company today. Change management, business transformation, diversity and conscious capitalism are also outstanding areas of his professional experience and are the most demanded by public institutions and private organizations.

He is an expert in conflict mediation, both in private corporations and in the political field, and has trained managers, politicians and businessmen from very different sectors, as well as helping a good number of institutions, both in the management of change and in the solution of conflicts and in the development of their organizations.

In recent years, Euprepio Padula has established himself as a renowned communicator in different media, in which he has set out to place on the television, radio and print press agenda all aspects related to political and business leadership. His blackboards had been groundbreaking in La Sexta. Never Mariano Rajoy, Pedro Sanchez, Pablo Iglesias, Albert Rivera and the rest of political leaders, had faced such a detailed analysis of their leadership, highlighting their strengths but also their areas for improvement. In the program “Más Vale Tarde”, from La Sexta, with Mamen Mendizábal, his “autopsies” of leadership and communication of public figures has been comented. In the space “Espejo Público”, of Antena 3 TV, he has placed under her particular magnifying glass, together with Susanna Griso, the majority of the most important social and political events.